The infrastructure investment plan announced 51,300 million pesos for the project

This Wednesday, at the morning press conference, President López Obrador announced the 39 projects of the infrastructure investment plan. This federal government strategy, in coordination with the business sector, represents a total investment of 297 billion pesos for public works in the coming years.

One of the projects that attracts attention is the investment of 51 thousand 300 million pesos in the construction of the Mexico-Querétaro Train. The conference did not elaborate on the company chosen to carry out the project but did announce that the work will begin in June 2021.

In August of this year, the president announced that the government would be willing to resume the transportation project that has been suspended since 2014, during the government of Enrique Peña Nieto, and that never began works.

That year, the competition for the work also projected an investment of more than 50 billion pesos. But, from the beginning, it was tainted by suspicions of corruption. The communications and transportation ministry published the tender in September and gave the companies two months to submit their proposals. Different construction companies claimed that the deadline was too short and unrealistic to plan a work of that size and with that budget. But, at the end of the term, the secretariat awarded the tender to a consortium of Chinese and Mexican companies.

One of the Mexican companies was Constructora Teya, the same company that received several million-dollar tenders in the State of Mexico during the Peña Nieto administration. These facts, by themselves, cast doubt on the legitimacy of the contest. 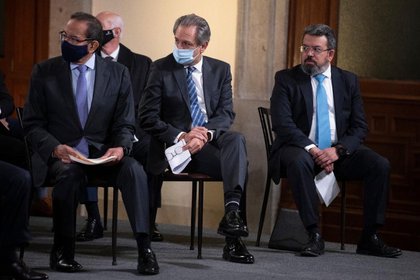 Three days after the award to the Sino-Mexican consortium, the then Secretary of Communications and Transportation, Gerardo Ruiz Esparza, went to the Senate to defend the bidding process. Meanwhile, President Peña canceled the result and called for a new start.

The journalistic narration of the events says that Peña Nieto decided to cancel that contract because some foreign correspondents contacted him to give a statement about the White House report that Aristegui Noticias would publish the following Sunday.

And it is that this report was completely related to the Mexico-Querétaro Train. Carmen Aristegui’s research team found that the company that made the famous home of the former president and Angélica Rivera was Constructora Teya. This revelation served to support the suspicions of corruption in the megaproject contest.

In January 2015, the former Secretary of the Treasury, Luis Videgaray, announced the definitive cancellation of the project.

The government of China initiated two processes against the Mexican government for the cancellation of the contracts. In the end, the administration had to pay 600 million dollars to the production companies of the Chinese state for non-compliance.

In the 2020 investment plan, it remains to be seen who will take responsibility for building the train, one of the four railway projects administered by the government of President López Obrador.