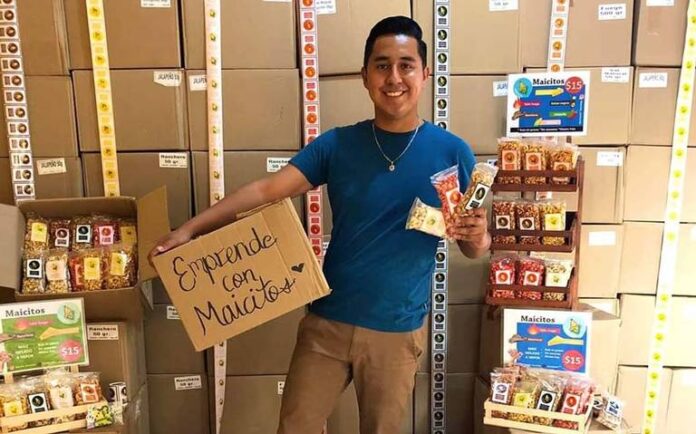 Baja California Sur.- The pandemic has awakened the interest in entrepreneurship as a way to survive in the contingency, there are those who today are a whole success story like that of the young higher-level student Cesar Alejandro Amayo Cisneros who started by selling 6 boxes of snack products and today is the national director of Maicitos in BCS, a healthy corn snack that became a trend in this health contingency.

“When the pandemic arrived, I was studying in Guadalajara, I went on an exchange, distributed cornflakes in schools to help in my studies, we went to schools, high schools and universities, the pandemic arrives and the business closes, it was there that they began to look for a way of distributing the product in the country, I returned to the state and they recommended me to join, I started with only 6 boxes and now I have about 40 or 50 people who distribute ”.

Originally from Ciudad Constitución, the young university student relates that the pandemic helped him to position his product since social networks became essential, citizens were in charge of uploading photographs with the product and the treatment at the time of delivery that was admirable helped him that the company in this area grew considerably.

“I was very afraid at the beginning, I had never started, we started with that direct attention to people and they began to like it, only two days those boxes lasted us, the boom began in Ciudad Constitución and from there it spread in the state because I started to look for who wanted to associate to generate sales and their own employment with the sale of products, I was the one who came to the state with this snack and today I am glad that it is a success ”.

He assures that this business has boosted the economy of many people who are dedicated to distributing, personally, he has had great economic rewards that have helped him to contribute to his studies and most importantly at home since he is of limited economic resources and with the earnings has managed to finish with the construction of his mother’s house.

“There was a time when we were left without a home and it was something painful, it was starting to build a house little by little, among the whole family we supported for the realization but it was very slow, I had to go out of state to study and I don’t know I was moving forward when I return, corn flakes come into my life and I begin to see that it is a very profitable business and we begin to build the house, right now the house is finished ”.

“The idea was to help my mother, especially to fulfill the dream of her home, in the end, I succeeded, that’s what makes me proud to be in this business because, in the end, I was able to help my family that was my goal personal, as I could I know that someone else is doing it ”.

Now he is the official distributor in the state, he has been in charge of carrying out his studies and brings income home, all with dedication and effort, without a doubt Cesar Alejandro faced the pandemic and looked for a way to get ahead, demonstrating to the society that with determination and will dreams can be fulfilled.