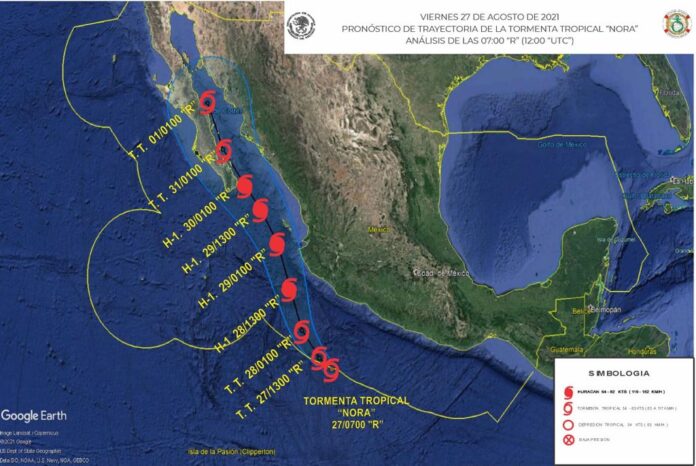 Erick Santillán, director of Civil Protection in the Municipality of Los Cabos announced that members of the Municipal Council of Civil Protection are working on preventive work in the face of “Hurricane Nora” forecasts, estimating that it will impact Southern Baja California coast in the next few hours, leaving its effects felt Saturday night and early Sunday.

The municipal official said that local authorities are monitoring the displacement of the natural phenomenon and thus avoid surprises, from now on they are working on protection measures before, during, and after the impact of the storm

“We are going to continue with the surveillance; We must remember that we have a Tropical Cyclone Alert System and that is the SIAC, so we will be working on surveillance but especially on the publications of the Alert System to give warnings in a timely manner and guarantee the safety of people”.

Regarding the actions of the government agencies, he said that in meetings with the Mayor of Los Cabos, Armida Castro Guzmán, Rosa Delia Cota Montaño, general secretary of the Los Cabos City Council and the Director of Public Security, Juan José Zamorano, they are ready to respond. In the event of any eventuality, they are even already alert and ready to carry out prevention work, because landfall is expected on Saturday night and early Sunday morning, rainfall that will possibly prevail until Monday.

“It is likely that on Saturday to dawn Sunday we will begin to feel the first rains, while the waves will be present from this Friday or Saturday, but the cyclonic activity will begin in the early hours of Sunday.”

Alberto Valerio Verduzco, Port Captain in Cabo San Lucas, alerted the maritime community to take extreme precautions, due to the effects of “Nora” and possible impact on the coast of Los Cabos.

In a message on Telegram and WhatsApp, the head of this agency indicated that due to the nautical warnings, forecasts and trajectory of the Tropical Storm they are notified that they must take precautions and preventive measures, in addition to establishing security protocols to safeguard the life and that of their boats.

He asserted that meteorological conditions will continue to be monitored and reports will be made in coordination with Civil Protection and the Naval Sector.

According to the Center for Meteorological and Maritime Forecast Analysis of the Naval Sector, they indicate that this atmospheric disturbance with all the possibilities of passing into a Category 1 Hurricane, leads to a parallel displacement to the coasts of Guerrero, Michoacán and Colima, leaving with it heavy rains and high waves.

They add that for Saturday afternoon heavy rains are recorded over the states of Jalisco, Colima, as well as rainfall records in Nayarit and Sinaloa, so the community should be informed.

In the case of Baja California Sur, the forecasts indicate that the phenomenon enters land and passes along the middle peninsula causing rains in a large part of the entity, as of Sunday, “Nora” is expected to impact land as a hurricane, there are chances that this Hurricane will degrade to Tropical Storm after unloading its force in the municipality of La Paz to continue its passage to Comondú, Loreto and Mulegé.