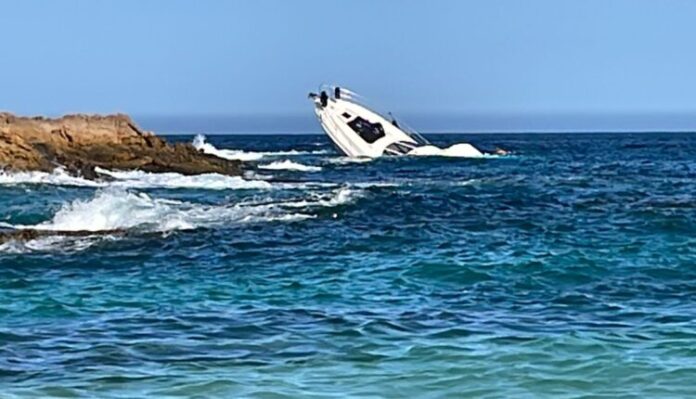 A series of videos and photographs of citizen Argel Maldonado, who documented the sinking of a yacht on Santa María beach, located in the tourist corridor of Cabo San Lucas.

In the images, it can be seen how the ship hits the rocks very close to the shore of the beach and begins to hit to sink.

So far the causes of the accident are unknown, the only thing that is known is that the crew of the boat were rescued by lifeguards from the beach.

Neither the maritime nor civil protection authorities have given any statement.

Mechanical failure caused the sinking of a yacht

Statements by Francisco Cota, deputy director of Civil Protection of the municipality of Los Cabos, assured that a mechanical failure caused the yacht to collide with the cliffs of Santa María beach this Saturday afternoon.

Witnesses in the area mention that the events occurred around 4:30 p.m., saying that after the mishap the water gave off a smell of diesel or gasoline.

Zofemat staff assisted the victims who were unharmed, one of them with a nervous breakdown, so they were transported in another boat without the need to resort to medical attention.

Exclusively for Tribuna de Los Cabos and CPS Noticias, Francisco Cota added that the yacht-type boat had a mechanical failure and after not starting, the sea current caused it to approach the cobbled area of ​​the beach, causing the boat to collide, drilling the hull, causing it to sink.

What is known about the yacht is that it is a sport fishing boat and that the Port Authority, in coordination with the Naval Sector, will be in charge of extracting said yacht. However, it should be noted that according to witnesses, the authorities took more than 2 hours to arrive at the scene and close the beach. Likewise, no element of the Secretary of the Navy had a presence in the area.

Playa Santa María will remain closed with a black flag, so entry is prohibited until further notice.