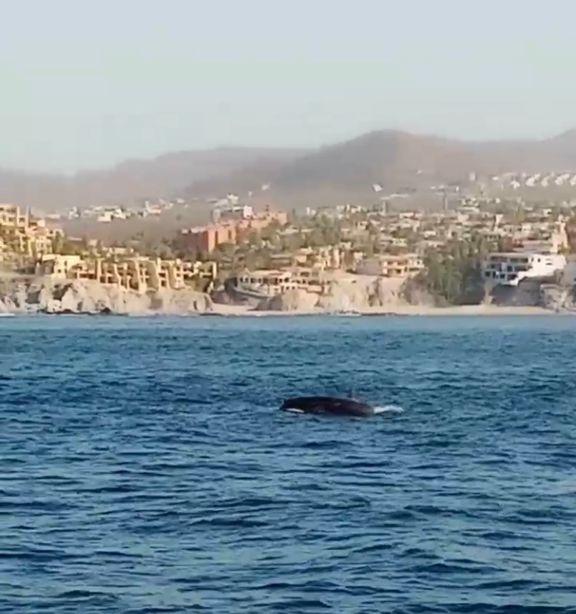 Astrid Frisch Jordán, a representative of the National Coordination Raben Ecology and Conservation of Whales, indicated that in the entire history of RABEN, they had never had a report of an entanglement in June.

She explained that the oceans are changing and with them the cycles of their inhabitants, but RABEN volunteers are always ready for action, even in the most unforeseen moments.

Whale rescues are highly risky and only trained and authorized personnel should carry out the maneuvers, however, success is only possible with the help of many people who report properly and who support us so as not to lose sight of the whale.

“This success story began on June 9 with the report that sport fishermen from Los Cabos sent us, the whale was found on the Pacific side more than 10 miles from Cabo San Lucas.”

The RABEN team went out in search of the marine mammal, however it was not possible to relocate it at that time until the other day, an animal that was very close to the Cabo San Lucas marina:

“The report was sent by service providers who waited patiently for the RABEN team to arrive, so that the whale would not get lost in the immensity of the ocean.”

It was a juvenile humpback whale, which unfortunately was in poor condition, that is, it had severe cuts, many parasites, and was skinny. It was enmeshed with tight ends around the base of the tail and one of its pectoral fins.

He explained that the RABEN team carried out the maneuvers according to the entanglement care protocol and freed the whale from the ropes and buoys that held it, it is worth mentioning that, when examining the buoys, ” we realized that they are not of Mexican origin .”

This rescue was possible thanks to the efforts of many institutions, companies, and people, thanking the support of the Naval Sector of Los Cabos, Federal Attorney for Environmental Protection (Profepa), Municipal Ecology, National Commission of Protected Natural Areas (Conanp), and Captaincy of Port of Cabo San Lucas. ” We hope this finally free whale gets a second chance .”