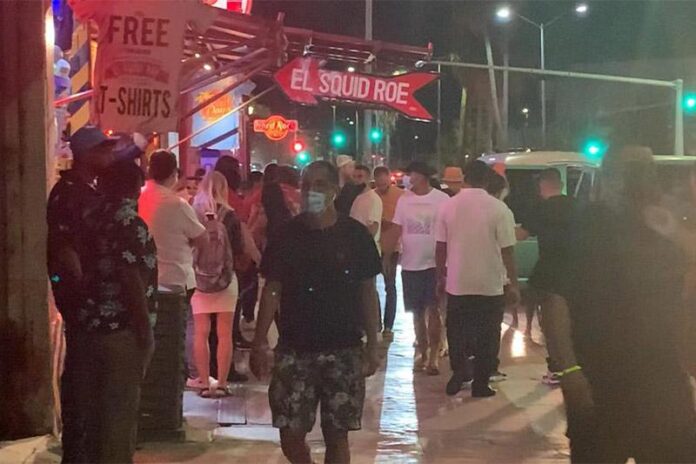 Los Cabos despite the threat of falling back to the Red covid Health Alert Traffic Light, due to the high rate of Covid-19 infections and the large number hospitalized, it can be seen that a large number of people are concentrated on the outskirts of nightclubs. people waiting to enter the place, appreciating that some people, in addition to not keeping a healthy distance, do not use the mask.

After sanitary measures were further limited, due to the high number of active cases of SarsCov2, by suspending various non-essential activities, reducing the capacity to 30% and shortening the hours to the public, social disobedience continues on the outskirts of business.

There are even people who collaborate in the nightclubs on the outskirts of these establishments, inviting passersby to consume in the place, despite the crowds on the public highway.

In the images taken by CPS Noticias, it is also seen how there is a high mobility of both people and vehicles and how people are concentrated in groups regardless of not bringing the mask, in addition to seeing that the patrols pass by without doing anything about it.

Ivan Nuñez, representative of the State Commission for the Protection of Sanitary Risks ( Coepris ) in Los Cabos announced that in 2 days of operations they have carried out 78 Evaluation Certificates to restaurants, bars, finding 17 businesses that ignored the sanitary and safety recommendations. these 2 were suspended.

In the case of gyms, he said that there are 19 complaints from the public, of which 9 have been suspended.

He indicated that together with the Civil Protection and Fiscal Inspection of Los Cabos, they have carried out verifications to several businesses in the tourist area of ​​Cabo San Lucas, especially restaurants – bars.

He emphasized that businesses must strictly abide by health protocols, specifically the allowed capacity of 30% and the one that does not have musical groups, that is, pure recorded music is allowed.

He also asserted that the hours of operation in the establishments of the municipality were reduced until 10 p.m., the objective of all these limitations is to reduce the high rate of infections and spread of the virus.

He added that there is currently a high influx of tourists in the south of the entity, so it is of the utmost importance to avoid spreading the contagion of Covid-19, since they have seen that the majority of the visitor does not bring face masks, so it is acting on the case, asking for the collaboration of the owners of the establishments, make the observation to the diner.

He asserted that visits have been made to gyms, finding some that do not comply with health protocols.

He pointed out that the purpose of visiting the businesses was with the idea of ​​promoting health promotion through an Evaluation Certificate in which the areas of opportunity (weaknesses) to be implemented are noted.

He stressed that if these small warnings are ignored, a verification order will be issued in which a legal procedure will be lifted and if the omission persists, the total or temporary suspension and of services will be lifted, but if it is a repeat offense. now if it proceeds legally.