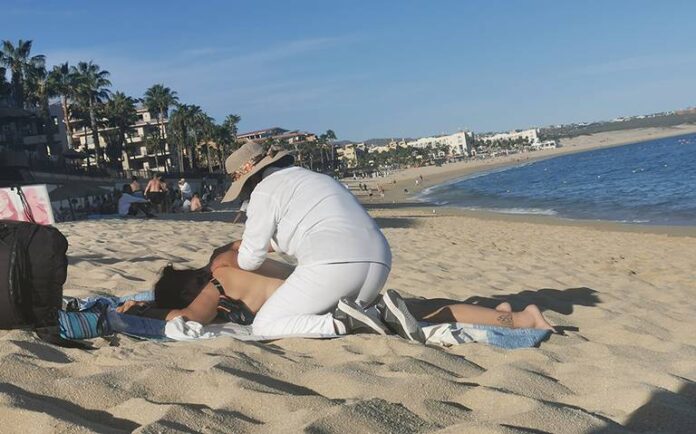 They offer services not allowed, from hairstyles to tattoos, businessman calls the authorities to carry out their work

Los Cabos, Baja California Sur. – A businessman calls the municipal authorities to carry out his work on El Medano beach, as he said that there are vendors who are not allowed and that today they are out of control.

Gabriel Larrea Santana, a businessman from El Médano Beach and president of the El Tezal Citizen Council, announced that the street trade on the emblematic beach of Cabo San Lucas has grown significantly, even in many cases there are more people offering some product and service that tourists enjoying the place, for which municipal authorities should proceed, they are supposed to charge a salary for doing their work and that until now they have not done.

Massages, hairstyles, sale of food and drinks of all kinds, tattoos, activities that are out of control, due to the lack of filters in the access to the beach, are some of the services and products that are offered, without being allowed.

He said that despite being at level 5, critical, of the epidemiological traffic light, which causes health regulations to be more limiting, El Médano beach is uncontrolled.

He emphasized that in recent days the arrival of tourism to the destination has been appreciated, so the influx of guests on the beaches grows as the days go by, which of course generates the indiscipline of having more people selling and offering an infinity of services.

“On many occasions, there may be two tourists sitting on the beach and in front of them, 6 people offering products and services, it is very recurrent to see those street vendors far exceed the number of people who visit the beach, a fact that is seen in various times of the day ”, he specified.

I assert that the tourist who goes to the beach of El Médano beyond seeing the sea and the landscape, what he sees is a display of products and services, which insistently offer what they have, becoming annoying, what It shows that the health and safe distance protocols are not being followed.

Beach vendors also offer illicit substances a recent joint operation carried out by the Municipal Public Security, Secretary of the Navy, National Guard, and Tourist Police, in the area of the Marine.

This was reported by the general director of Municipal Public Security, Juan José Zamorano, after noting that they have been carrying out constant operations in coordination with the Fiscal Inspection and those people who do not have their authorizations are invited to leave the place.

He said that on the issue of regulating street vendors on beaches, downtown, and the Navy, they are working on joint operations, the economic crisis due to the effects of the pandemic have led people to go out to work and not respect the inspection rules Prosecutor, who indicates the days and places where it can be carried out because there is a lot of supply and little demand, that is for those who have permits but there are many more who do not have them.

He stressed that special attention has been paid to avoiding crowding and harassment of tourists by street vendors, because there is a lot of supply and little demand, so control is being retaken, it is understood that there is a great need for work, vulnerable citizens, but In a coordinated manner and maintaining order, they cannot be allowed to work without documentation and those who do have it at non-permitted hours.

He also mentioned that there have been arrests of vendors who, in addition to offering handicrafts, have been detected offering drugs, so action is taken immediately.

There are several operations, with the Secretariat of the Navy, National Guard, and Tourism, where the arrests have been made, people are detected in their belongings with illegal substances, and on other occasions, they are caught offering drugs, for which they are detained and According to the number of illicit substances they carry, they are sent to the municipal rail and if the amount is too much they are made available to the Attorney General’s Office.

He said that the businessmen’s call has been to pay greater attention especially in the center, tourist area, El Médano, and La Marina, where it has been detected that there is a greater supply of drugs by street vendors, so special attention is being paid to these areas.

Finally, he indicated that in the month of September there was a slight increase in the crime of robbery from home, room, and vehicles, fortunately, it occurred with those responsible who today are already under process in the Public Ministry.