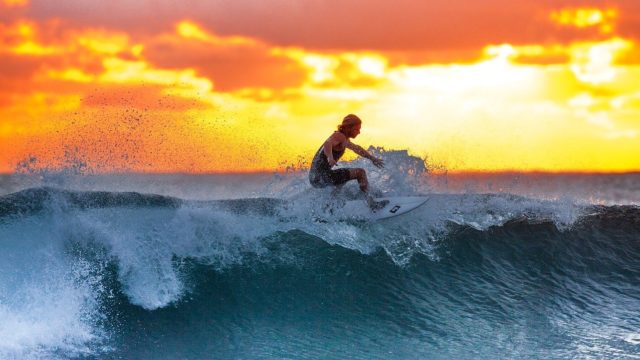 From Baja California to Oaxaca, Mexico has some destinations long desired by lovers of this sport around the world.

The beauty of the beaches of Mexico is internationally recognized to rest and enjoy a few quiet days. However, the country also has challenging destinations in which to surf and conquer the ocean aboard a surfboard.

These are the best beaches in Mexico that bring tourists from all over the world, who come ready to challenge the ocean.

The northern peninsula of the country has some of the most attractive destinations for those who seek to face a great wall of water, which bursts with its force near the coast.

Ensenada is known as ‘ The Cradle of the surf in Mexico ‘. A perfect combination of crystal clear waters and high waves surrounds this charming town with its marvelous beauty.

In Baja California , Los Cabos and Rosarito also stand out . Meanwhile, the Bahía de Todos los Santos is considered a world surfing reserve due to its gigantic waves.

Among the best beaches in Mexico for surfing, Mazatlán, Sinaloa and its fame with gastronomy from the sea stand out. This is the surfers’ point break, as it has been the scene of important international sports tournaments.

For those looking for a fishing town with a bohemian atmosphere, picturesque streets and magnificent waves, there is nothing better than Sayulita, Nayarit. Despite the large number of international tourists it receives, it still maintains that carefree air and a complimentary proposal of art galleries and good gastronomy.

Another obligatory stop is the beaches of the southeast of Manzanillo in Colima: Boca de Pascuales or Cuyutlán await with their waves of up to five meters and some of the best sunsets on the Pacific coast.

To the southeast is one of the four best beaches in Mexico for surfing: Zicatela, east of Puerto Escondido. With only 4 kilometers in length, it has waves that are a real desire to conquer by the most experienced surfers.

San Agustinillo is a small fishing community in Oaxaca, located between Mazunte and Zipolite. It has a rich biodiversity and its beach has perfect waves to practice surf, swim quietly, or do snorkeling.

These beaches in Mexico awaken the passion of any surfer who yearns to conquer their waters.