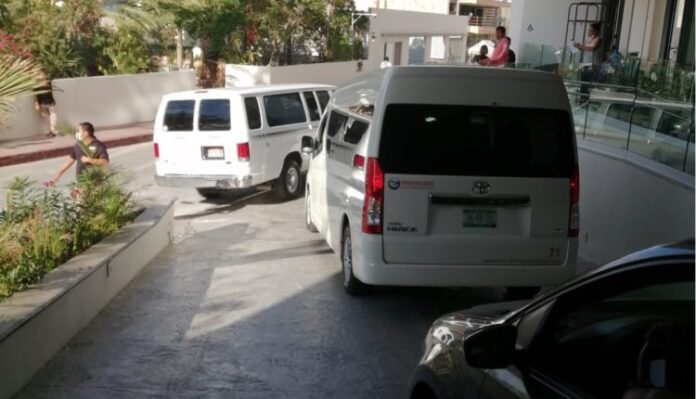 The conflict taxis-tourist transporters resurfaces in Los Cabos, this Saturday an incident arose in a well-known hotel del Médano, where a taxi driver blocked the exit of the transport unit preventing the transfer of tourists with the effect on the image of the tourist destination and affecting the same hotel.

This was reported by those affected who commented that a taxi driver crossed at the exit of the resort demanding to be shown the seal and they did so to avoid conflicts, but even so, the unit remained for several minutes obstructing vehicular traffic.

This was how it was for a long time, the tax inspector Carlos Higuera arrived at the place and no longer allowed the exit of the tourist unit because the time limit they have for the transportation of tourists had elapsed, so, unfortunately, said the affected, the taxi drivers ” got away with it “, which is a very serious problem that authorities must solve.

The affected carrier said that it was taxi unit number 34 that without justification blocked the tourist unit so that it lost the time of 40 minutes and could not remove the passenger.

“I explained to one of the taxi drivers that I was complying with the regulations, yet he blocked me and no longer allowed me to take out more people, when we are working in order, complying with the stamps, because of this affectation I had to pay the taxi to 12 people that he was going to move, which is a serious problem that affects the tourist transport sector ”, he stressed.

“Without authority, taxi drivers block the entrance and exit of hotels causing you to lose the window of time to get people out and then the inspector arrives greeting all the taxi drivers and they are his friends, his allies.”