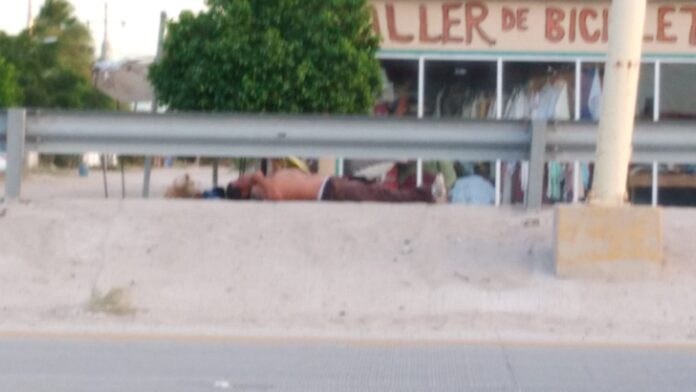 The victim, identified as Gisleno Medina Flores, tried to slap them away, but the bees attacked him and stung him, to the point of killing him.

La Paz, Baja California Sur.- A homeless man was killed by a swarm of bees.  He was attacked on the afternoon of October 15, when he was wandering through the second zone in the town of Chametla.

The 38-year-old victim was walking along the Transpeninsular Highway to the North when at the intersection with Escuadrón Aéreo street, he came across a beehive on a galvanized sheet roof.

The man identified as Gisleno Medina Flores , tried to scare them away with slaps, but the insects attacked him and stung him, causing him to retreat at least three meters.

The homeless man tried to push them out of his way by slapping his hands again, which detonated in an attack by the group of insects, because he was overwhelmed by bees, he ran away.

He was then chased at the point of pickets until he fell on the central ridge of the road from Chametla to La Paz.

The witnesses who observed the attack did not know what to do or how to act.

However, they called C-4, reporting the bee attack. Unfortunately, and by mistake, the C-4 passed the report half an hour after the attack. The ambulance that was sent was not even equipped to deal with these types of contingencies.

When paramedics arrived, the victim was still alive. He was not wearing his shirt and was wallowing in pain.

The homeless man with a thin complexion and white complexion, began to foam at the mouth , when they tried to revive him, dying on the spot.

After the lifeless body was picked up and taken to the Forensic Medical Service, it was ruled that Gisleno Medina Flores, died of secondary anaphylactic shock due to bee sting.

The homeless, according to data collected by MetrópoliMx , was known in the area, so from time to time, he ate and slept in a Christian group of that population.

The body of the victim was collected this afternoon by relatives to give a Christian burial.