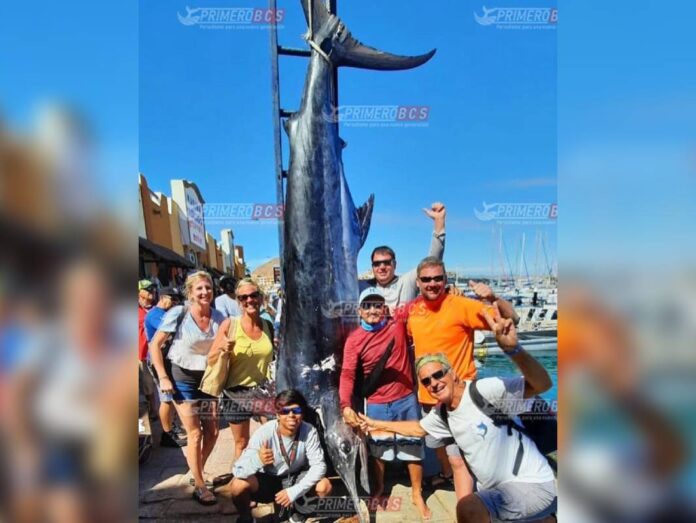 A new sample of the incredible marine specimens that surround the South Californian waters, occurred this Wednesday after the capture of a 660-pound large blue marlin -almost 300 kilos- in Los Cabos.

Although the season for blue marlin and black marlin is considered to be from September 15 to December 15, a group of sports fishermen have been fishing for large specimens in late January and early February.

This Wednesday, it was announced that the blue marlin was caught by Marshall Ryerson from Michigan, who was aboard the “Dream Maker” boat led by Captain “Cheque” Cervantes.

The specimen was captured while they were fishing for tuna, so it is possible that it got entangled, which could have helped the fisherman.

In an interview for Primero BCS, the coordinator and adviser of sport fishing tournaments in BCS Clicerio Mercado, elaborated that currently there is not much presence of boats, which could be a reason why large specimens are coming out, such as the blue marlin of 700 pounds captured a few days ago.

He pointed out that sport fishing has a range of 50 nautical miles from the seashore, however; these species can be found from 30 nautical miles, as long as the temperatures and sea currents allow it.

In this regard, a fisherman from the community of La Playa explained that the abundance of the waters that surround the low is great, and a clear example is that recently in 2 days he caught 12 striped marlin, a species that is closer to the shore and is maintained throughout the year.