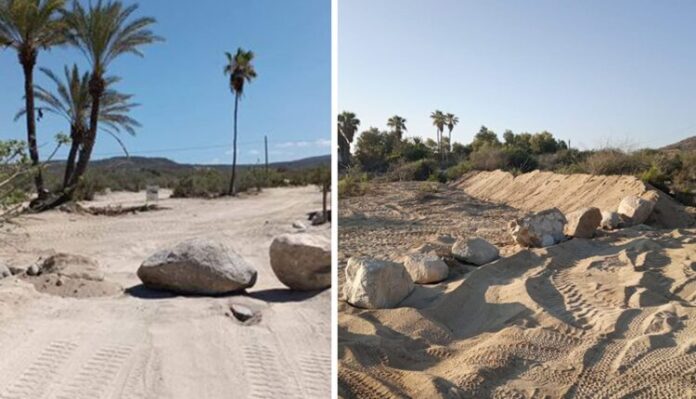 In accordance with article 373 of the Penal Code for the Free and Sovereign State of Baja California Sur, chapter two on crimes against the right to access and enjoy natural resources, it establishes that:

“Three to seven years in prison or a fine of one thousand to three thousand days will be imposed on anyone who illegally closes, destroys or prevents access and enjoyment of natural resources in priority areas for conservation and protected natural areas under state and municipal jurisdiction.” .

This sanction will also apply to any person who closes, obstructs, destroys or prevents access to the beaches or the Federal Maritime Terrestrial Zone ( ZOFEMAT ).

In this sense, those responsible for obstructing the beaches in the Eastern Cape would be subject to sanctions, however, at the close of this publication it is not known if those responsible have been located, as well as if the most recent event will be carried out legally. published through social networks where the blockade of access to Buenavista Beach in BCS was evidenced through video and photographs.

Fact to which the mayor, Oscar Leggs Castro expressed that:

“I do not allow acts of corruption and even less this type of action that violates the right of free access to the beaches. That is why I did not allow some to enter the municipal government to work, because they were seen as everything except commitments with the 4T”.

Thus, giving instructions to the municipal ZOFEMAT to investigate and punish those responsible.

It remains to be hoped that no more acts of this type will be added to privatize the beauty of each of the beaches of the mid-peninsula.