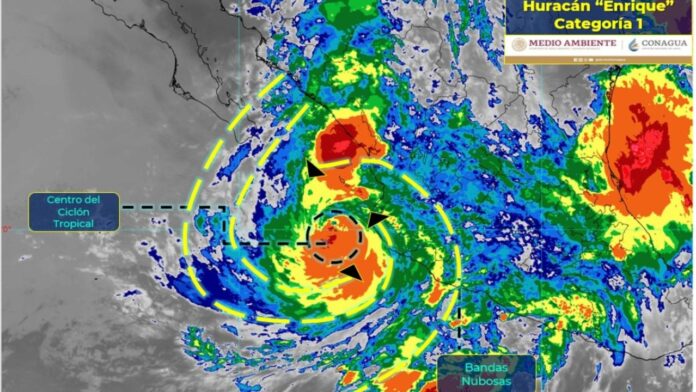 They will place sanitary filters in shelters, to isolate people with symptoms of Covid-19

La Paz, Baja California Sur.- In a session chaired by Governor Carlos Mendoza Davis, the State Civil Protection Council agreed to initiate preventive actions against the eventual impact of Category 1 Hurricane Enrique, which according to the forecast of the National Meteorological Service (SMN), would be on land on the afternoon of June 30, entering as a Tropical Storm through San José del Cabo to cross through La Paz and end as Low Pressure on July 1 and 2 northwest of Cabo San Lázaro in the municipality of Comondú, leaving behind accumulated rains of between 25 and 50 millimeters.

Given the possibility that the impact of the meteor would make it necessary to evacuate people who live in risk areas, the Under secretariat of Civil Protection and the Secretaries of Education and Health, reported that 94 temporary shelters are in a position to open in a first stage statewide, of the 173 that could be enabled.

The Undersecretary of Civil Protection Carlos Godínez reported that in the entity there are 65 thousand 028 people who are settled in risk areas, and that of these 45 thousand are located in Los Cabos, 5 thousand 500 in La Paz and the rest in the municipalities of Comondú, Loreto and Mulegé

In total, 1,342 classrooms would be available to which people would be admitted after assessment by medical personnel, in order to detect symptoms of Covid-19 and, where appropriate, isolate them and without them having contact with the rest of the sheltered population; For this purpose, rapid tests and a protocol designed since 2020 will be applied for the mobilization of the colonies to temporary shelters.

However, it is estimated that Enrique could bring the state more benefits than damages due to the volumes of water discharged during his passage through the south of the state that faces a drought of more than a year and a severe depletion of the aquifers, the The National Water Commission maintains a special vigilance on the dams, considering that only the San Lázaro is at 100% of its capacity; the Good Woman is at 35%, Higuerilla at 11, La Palma at 8, La Santa Inés at 2% of its capacity: The ElIhuagil Dam is completely dry; All will remain with the chute open.

In his speech, the newly appointed Local Director of Conagua in Baja California Sur, Víctor Manuel Castañón, reported that Enrique is the first hurricane of the season in the Pacific and that there are 4 tropical storms, out of a total of between 14 and 20 phenomena that occur. they wait until before November 30; explained that the trajectory of the meteor towards waters of the Gulf of California was derived from the temperatures of between 29 and 30 degrees Celsius in the Sea of ​​Cortez, against those of 18 and 19 in the Pacific Ocean.

Taking care of the trajectory towards the northwest and the travel speed of only 7 kilometers per hour, Conagua established a surveillance zone from Cabo San Lucas to Los Barriles.

In anticipation of possible damages, the armed forces and the National Guard began mobilizing and alerting their elements on Monday; The Army declared itself ready for the implementation of the DN3 Plan, sent personnel and vehicles to San José del Cabo and Cabo San Lucas, and keeps the Third Battalion of Combat Engineers on permanent alert, which would also be mobilized if necessary.

The Secretary of the Navy started the Marine Plan in its prevention phase, including the naval search and rescue stations, and is providing a shelter in Los Cabos.

On behalf of the National Guard, the thousand elements that exist in the state are ready to provide help to the population that is affected, and from Mexico City there have been 3 groups that can be mobilized by air to the entity in case of what is required.

At the moment there is no movement of personnel from the Federal Electricity Commission from other states, although the local, divisional and national Strategic Operation Centers have already been installed, from where the trajectory of Hurricane Enrique will be monitored.

As of press time, all ports and airports in the state remained open. The session of the State Council of Civil Protection will resume this Tuesday at 9 in the morning.