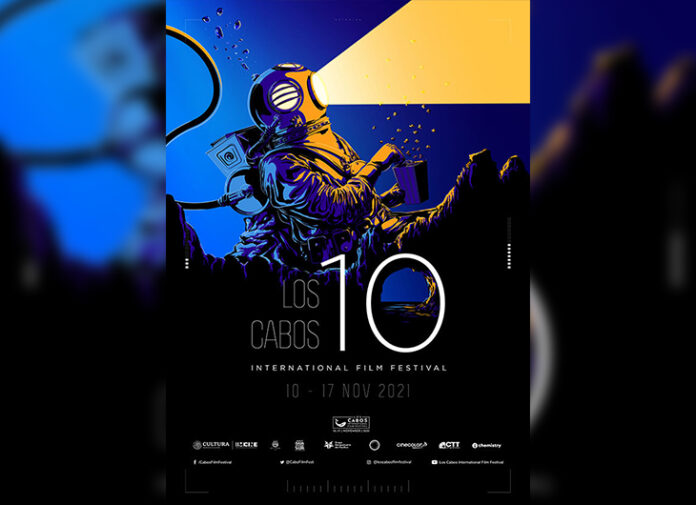 To celebrate the 10th anniversary of the Los Cabos International Film Festival, this year it opened a call for young designers, graphic and visual artists from all over Mexico, inviting them to think, create and develop a visual concept that gives # LosCabos10 a unique face and inimitable.

The talent displayed in each presentation was remarkable. After a long deliberation, the piece by David Rodrigo Pineda Ortiz was chosen to become the image of the 2021 edition of the International Festival to be held from November 10 to 17 of this year.https://b010cd27aff2582f895be47d9fb47ffa.safeframe.googlesyndication.com/safeframe/1-0-38/html/container.html#xpc=sf-gdn-exp-e&p=https%3A//tribunadeloscabos.com.mx

Surrounded by the iconic landscape of Los Cabos, at the bottom of the Sea of ​​Cortez, a diver enjoys the cinema experience, comfortably seated on the seabed. He, in turn, is being observed through the lens of a digital camera. This image thus alludes to a festival capable of adapting to a reality in which the physical and virtual environments coexist and complement each other to create an organic experience that the public can enjoy, regardless of their geographical location.

This world cinema in Los Cabos – an expression coined by designer David Pineda – also targets new audiences and access to our film programming from all corners of Mexico, thanks to Los Cabos Online.

“This year’s image immerses us in a surreal representation in which we enjoy, together with the diver, this international show. With the light of the aqualung, we symbolically represent a film projector that not only shows films, but also places us, the public, as the origin and essence of the festival ”, said David Pineda, designer of the # LosCabos10 image.