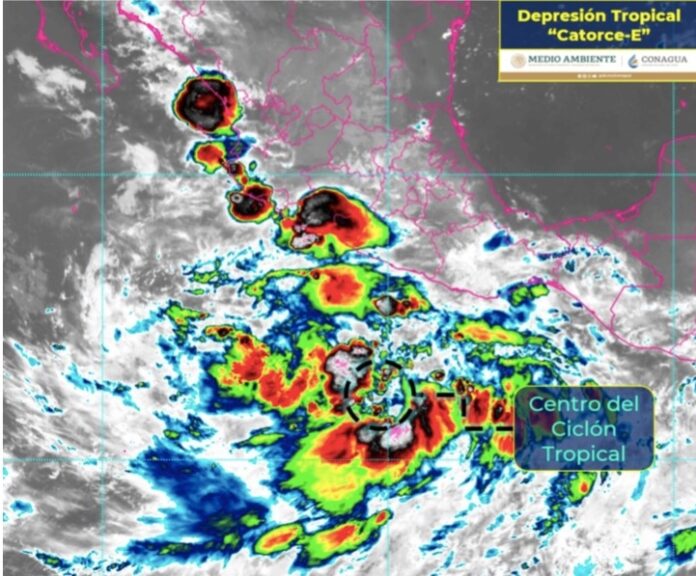 The system that this day is expected to evolve into a tropical storm, will border the national coasts and will leave abundant rains; current displacement will place it right on land where it could enter the Gulf of California

Mexico. – A displacement that will border the coasts of the Mexican Pacific, brings to the moment the tropical depression “Catorce-E”, which for this Thursday, August 26, will become a tropical storm and will rapidly evolve into a category one hurricane.

In its morning warning for cyclones and hurricanes, the National Meteorological Service establishes the trajectory of the 14th system of the season with a trajectory that could directly impact the Baja California Sur Peninsula, and it is not ruled out that it enters the Gulf of California.

This is the first cyclone that does not have a fixed trajectory for deep waters, at the moment it is west-northwest at 13 km / h and is located 550 km south of Acapulco, Gro., And 875 km south-southeast of Manzanillo, Colima, with sustained winds of 55 kilometers per hour and gusts of 75 km / h.

The National Meteorological Institute emphasizes that its circulation will generate winds with gusts of 60 to 70 km / h and waves of 2 to 3 meters in height on the coasts of Michoacán, Guerrero and Oaxaca, so the recommendation is to exercise extreme precautions to the general population in the areas of the states mentioned due to rain, wind and waves (including maritime navigation) and to attend to the recommendations issued by the authorities of the National Civil Protection System, in each entity.

The evolution of “Nora”
• The SMN highlights that “Nora” will be activated as a tropical storm at noon this Thursday, August 26, 428 kilometers south-southwest of Acapulco, Guerrero ..
• On August 29 and at the earliest nearby, it will be a category one hurricane 120 kilometers south-southwest of Cabo Corrientes, Jalisco.
• By August 31 it will be 70 km south-southeast of Santa Fe, BCS and as a tropical storm, it will make landfall in the Baja California Sur Peninsula.
• From that moment on, their displacement would tend to enter the Gulf of California or go out again to the waters of the Pacific.

Olaf weakens after hitting Los Cabos as a cat 2 hurricane