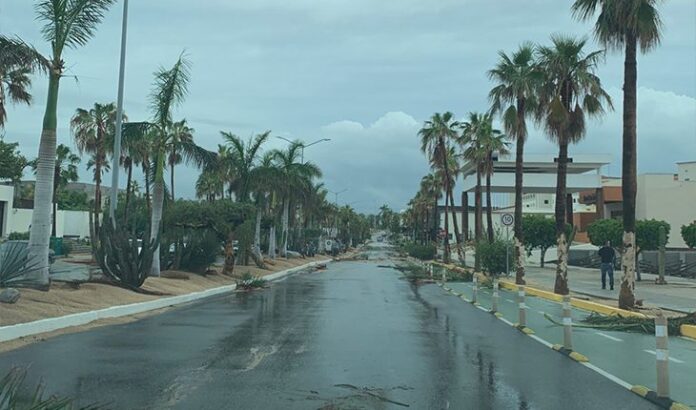 Without serious damage to the tourist infrastructure and with the 20 thousand tourists safe, reported the Los Cabos Hotel Association, the passage of hurricane “ Olaf ” through the Los Cabos area.

In an interview, Lizzy Orci, executive president of the AHLC indicated that fortunately there was no major damage, she was in constant communication with the guests who remained at the resorts.

At the moment they are in cleaning work but the hotels are reactivated one hundred percent with the attention to tourists and checking the departure of their flights, after yesterday there were several cancellations.

Most of the lodging centers are without electric power service but they connected their plants and emergency generators waiting for the CFE to reconnect the service, but without damage to the tourist infrastructure or affecting tourists.

He indicated that the tourist destination has an occupancy of 48 percent with a total of 20 thousand tourists, the airport has already restarted operations and it is expected to return to normal in the following hours.

On this occasion, he said that there is communication in the Transpeninsular, with some landslides and runoff, but the access to the Los Cabos International Airport via Ciudad Lineal is open and also through the bypass.

After the impact of cyclone “ Olaf ” in the municipality of La Paz, there were damages in different parts of the territory, however, despite strong winds, landslides, and constant rain, at the end of this edition no losses of life.

In this regard, Osiel del Real, director of municipal Civil Protection of La Paz, reported that at dawn on Friday, actions were coordinated to transfer to the respective shelters people who resided in the colonies of La Pasión and La Pitahaya, among others, this after they perceived the danger they were in from the impact of “Olaf”.

He shared that in the course of the morning, tours were made in the urban area, in order to quantify damage, the fall of light poles and trees was observed mainly, as well as the fall of some sheets or pieces of cardboard in the peripheral area.

Power outages were also recorded in different parts of the city. During the interview, Osiel del Real shared that the effects in the rural area were reviewed, but no serious damage was reported, some landslides were registered on the roads between La Paz and Los Cabos, but there were work crews cleaning what had happened. .

Finally, he shared that 29 people were received at the UABCS shelter, in El Centenario 10, in San Juan de la Costa 2, and others in Los Barriles, all reported in good condition.

Through a statement, the federal electricity commission announced that 191,923 users were affected by electricity cuts, which represents 57% of the total users in Baja California Sur, in this sense during the last session of the Council State of Civil Protection.

It was announced that around 30% of the electricity supply was already restored, so they asked citizens to be patient since the agency is carrying out all the emergency care protocols.