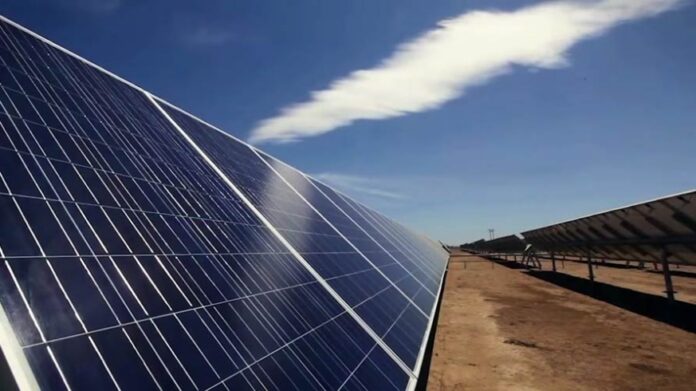 The facility, managed by Aura Solar was constructed by the Portuguese company, Martifer Solar which began construction in January of 2013. The extensive facility is located to the east-southeast of the La Paz International Airport with business development being managed by Gauss Energía, a Mexican company. The plant is estimated to have cost $110 million US dollars.

The plant will use 131,800 Suntech solar panels, some of the companies products are manufactured in the Philippines by the Chinese corporation, Suntech Power Holdings. The panels will be mounted on a single axis tracking mechanism to follow the sun. Suntech is one of the world’s largest manufacturers of solar panels, once holding the #1 position. Suntech’s Chinese Solar division filed for bankruptcy protection in March of 2013, due mostly to a misfiling of uncollected bills from customers. The market has been flooded with large format (greater than 240w output per panel) solar panels since 2009 and demand has not kept up with production, dramatically reducing per panel profit. Along with these woes, the tightening of world finances delayed payments for panels delivered to other large solar farm projects.

La Paz is one of the best places in Mexico to place a solar farm, and one of the better places in the world. La Paz has a high solar energy multiplier, based of our near direct angle to the sun and the number of clear sky days. The power from the solar farm will be sold to CFE at a rate equal to the current local cost of generation, by the two local diesel thermoelectric plants. The down side to this is, as more solar energy is generated, less diesel energy will be required raising the cost of both diesel and thus solar generated energy.

According to the resume of Martifer, the builder of the plant, this is the largest project the company has constructed; the company has a long list of completed project, mostly in Europe.

Unfortunately, this does not look like it will present a problem in the near future, nor does it mean the imminent closing of the two diesel fired plants, as the demand for electricity across other regions of Baja California Sur have soared. With the influx of North Americans – which are more power consumptive than the local population, expanded credit – which has allow more families to install air conditioning, and the general population growth in the region, it is amazing CFE has been able to keep up. The decades old plant at the head of the Ensenada de La Paz was once scheduled to be closed, now under constant renovation. The diesel plant outside La Paz has been expanded and does not have scrubbers on all of the systems. Despite all this solar energy production a brown scum often hangs over the city from the new generation facilities.

In Los Cabos a turbine plant that was once just for high load emergencies has been more than doubled and is on line almost constantly.

Part of the reason for the dramatic growth in electric usage in Baja has been the influx of North Americans. For electric usage Canadians top to world list with an impressive 4,741KWh/hrs per person per year. The U.S. is #2 and both of these countries citizens use more than 10 times the amount of electricity as the average Mexican, who used about 449kWh/hrs in 2010. When in warm climates, Americans use the most, as they are more reliant on air conditioning than Canadians, which use their hydro-generated power for winter heating. In Louisiana and Arizona for example residents use more than 12,000kWh/hrs per person. This hunger for electricity has weighed heavily on CFE demand scheduling.

The addition of the 30mW facility is not likely to result in a diminished use of current generation facilities, located in La Paz and Puerto San Carlos, as demand continues to rise nearly as fast as supply. Nor is the solar farm likely to effect electric rates.

The 30mw facility is hardly the largest in the world. The world’s largest solar farm is under construction in China and will be completely online in 2019 with a capacity of 2 gigwattsor about 67 times larger. The current largest online solar generation facility does not use solar panels, but is rather a solar furnace, in the Mohave Desert of the US. The Solar furnace generates 370 megawatts.

Investment in solar has piqued the interest of Wall Street as well. MidAmerican Energy Holdings Co., a unit of Warren Buffett’s conglomerate Berkshire Hathaway has purchased two solar power projects in a deal valued at between $2 billion and $2.5 billion in California.

Aura Solar is a private company that will sell the power back to CFE under Mexico’s new Small Electric Producers program. The plan is to encourage private investment in alternative energy production. Pemex has made rumblings that the domestic oil supply is nearing its end and by 2016 it is estimated that Mexico will become an oil importing nation, rather than an exporter.