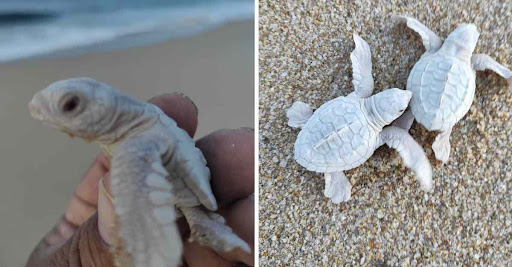 The Network for the Protection of the Sea Turtle confirms that two albino specimens have been born on the beaches of the tourist destination of Los Cabos, this happened in a nest located in the Pacific Ocean in charge of Carlos Villalobos.

The head of the Network for the Protection of the Sea Turtle in Los Cabos said that the albino turtles were identified from a nest of 109 hatchlings, which are in perfect health and will be released into the sea in the next few hours.

Albino humpback whales have been found on the coasts of Los Cabos, but it is the first time that the birth of olive ridley turtles has been discovered on the beaches of the tourist destination, which represents another attraction for the tourism that visits Baja California Sur.

The consequences for albino wild animals go beyond physical appearance or a reduction in the acuity of some senses. In the wild, an albino animal lacks the necessary camouflage to hide from predators, therefore light colors make it more visible and prone to attack. For this reason, the life expectancy in the wild of albino animals is reduced.

This disorder affects any animal species, although complete albinism is more common in domestic animals, such as mice, cats, dogs, and rabbits. However, it can also be seen in nature in wild species such as gorillas, snakes, whales, turtles, zebras, killer whales, amphibians, crocodiles, etc.

Some of them live or lived because they were cared for in zoos, but they gained a lot of popularity while they lived. These are some of the most famous albino animals in the world: