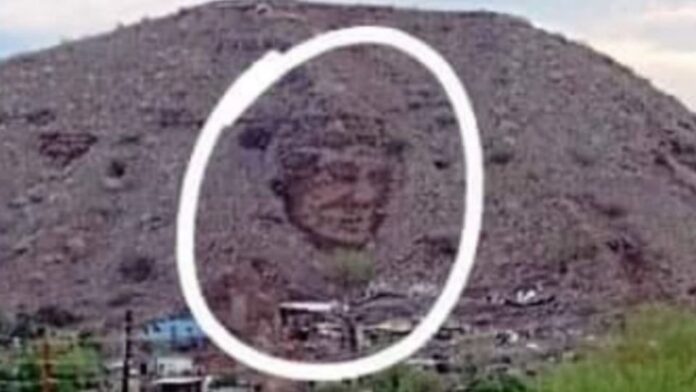 As Chimoltrufia would say “it will be the serene one”, but a face is observed, there it is clear, and whether it is Diosito or El Chavo del 8 is impressive and unusual “, expressed internauts

Optical illusion, a whim of nature or a divine message, until now no one knows how it was formed, but a mysterious face appeared huge on a hill in Baja California Sur and has gone viral.

Various interpretations have been given to this image. Believers qualify it as a message after the large number of seismic events, storms, volcanic eruptions, or violence that prevail in the world and the call is to love, respect others and nature.

Others, who look for logical reasoning to things, emphasize that this is due to the displacement of rocks, humidity after the constant rains and landslides of the hill that formed this image in a capricious way.

The truth is that the image promoted by the inhabitants of that area is going around the world and the face reflected in the slopes of the hill is clearly observed, where copious rains are also reported.

Some Internet users mentioned that it is a historical figure, others that it resembles the face of a native of the place and there are even those who affirmed that it is the spitting image of “Chespirito” jokingly

There were those who claim that it is an image trick and did not rule out that it was done to make it viral and that whoever promoted it would gain more followers, as an unreliable technique with which many have become “influencers”.

“And as Chimoltrufia would say ‘it will be the serene’ but a face is observed, there it is clear, and whether it is Diosito or Chavo del Ocho is impressive and unusual,” Internet users expressed in the publication of the fanpage La Dama de Paranormal Black, which prompted photography.