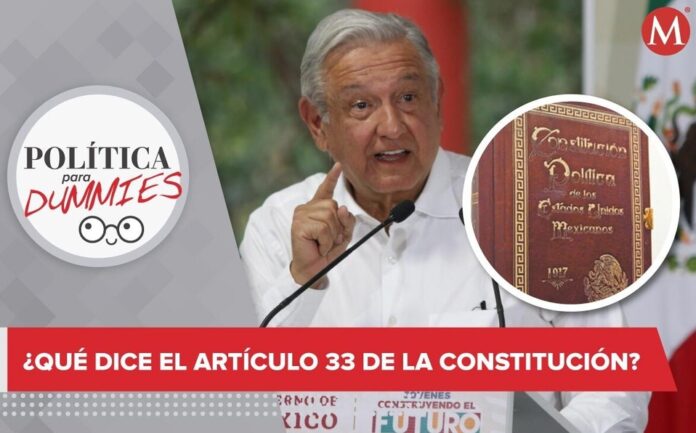 President Andrés Manuel López Obrador reported that he will analyze the possibility of eliminating or modifying article 33 of the Constitution, considering that it has been used as a repressive measure against foreigners.

President López Obrador pointed out in one of his morning conferences that article 33 of the Constitution, which was written in 1857, no longer corresponded to the current context of Mexico; Therefore, he asked the Secretary of the Interior, Adán Augusto López, to analyze whether it would proceed to reform or remove it, but what does this article consist of and why does it bother the president?

In accordance with the Political Constitution of the United Mexican States, which is in force to date; Article 33 reads as follows: “The Executive of the Union, after a hearing, may expel foreign persons from the national territory based on the law, which will regulate the administrative procedure, as well as the place and time that the detention lasts. Foreigners may not in any way interfere in the political affairs of the country ”.

Article 33 of the constitution defines who is a foreign person while guaranteeing the human rights and guarantees established by the Magna Carta.

How is Mexican nationality acquired?

According to article 30 of the Constitution, Mexican nationality is acquired by birth or by naturalization:

I.- Those who are born in the territory of the Republic, regardless of the nationality of their parents.

IV.- Those born aboard Mexican vessels or aircraft, be they war or merchant.

B) .- They are Mexican by naturalization:

I.- Foreigners who obtain a naturalization letter from the Secretary of Relations.

II.- Foreign women or men who marry a Mexican man or woman, who have or establish their domicile within the national territory and comply with the other requirements established by law for this purpose.

In a reform published in the Official Gazette of the Federation (DOF) on Friday, June 10, 2011, during Felipe Calderón’s six-year term, a paragraph was added which establishes that the Executive of the Union “Secretario de Gobernacion”, after a hearing, may expel from the territory foreigners.

Art. 33.- Foreigners are those who do not possess the qualities determined in article 30 of the Constitution and will enjoy the human rights and guarantees recognized by this Constitution. The Executive of the Union, after a hearing, may expel foreign persons from the national territory based on the law, which will regulate the administrative procedure, as well as the place and time that the detention lasts. Foreigners may not in any way interfere in the political affairs of the country.

Every time in the country there are controversial situations such as the presence of groups of migrants on the border, as in the case of Haitians; or even in a matter of shows, as with the Peruvian presenter Laura Bozzo; Said article is brought up to request the president to “expel” them from the country under the powers that the Magna Carta grants only to him and Segob in 2011.

Given this, the President said “It is an article that has been in place since the Constitution of 1857 and it is already another reality and has been used as a repressive measure in other governments. His government has never applied it and we will never apply it. Here foreigners can come and demonstrate ”.

He also referred that the purposes of his administration is not censorship, nor are they authoritarian, therefore “we want to guarantee full freedoms, that is why the debate is good, that is why the best system is a democracy, the least bad as the skeptics say, it is the best there is no other system more convenient than democracy ”.

Article 33 mainly established who the foreigners were and under their quality as human beings, the human rights that were awarded to them. However, in 2011 during the term of the PAN Felipe Calderón, a paragraph was added indicating that the head of the Federal Executive (Segob) has the power to expel foreigners if deemed necessary.

Foreigners also may benefit all the civil rights of the citizen; they can exercise their industry, trade, and profession; owning, buying, and disposing of real estate; navigate rivers and coasts; freely exercise their worship; will and marry according to the laws.

Expulsion of foreigners and international law

Only when there are causes of national security, the President of the Republic or the Federal Executive (Segob) will determine the immediate expulsion.

Three weeks ago after the visit of the leader of the Spanish far-right party VOX, Santiago Abascal, President López Obrador reiterated that said article was not going to apply and was proud to declare that his administration will never do so. He also reported that if at the moment there was someone vetoed, who could not come to Mexico, the government of the Fourth Transformation would lift said vetoes.

“In addition, all freedoms are guaranteed so that no one says they can’t come to Mexico,” added López Obrador; and he also recalled the visit of the writer Mario Vargas Llosa; While he recalled that during Calderón’s administration, an artist who made certain statements against the PAN government was prohibited from entering.

Mexico as a signatory American Convention on Human Rights

Considering that these principles have been enshrined in the Charter of the Organization of American States, in the American Declaration of the Rights and Duties of Man, and in the Universal Declaration of Rights Humans that have been reaffirmed and developed in other instruments international, both universal and regional;

Reiterating that, in accordance with the Universal Declaration of Rights Humans, only the ideal of a free human being can be realized, free from fear and misery, if conditions are created that allow each person to enjoy their economic, social, and cultural rights, as well as their civil rights and politics, and Considering that the Third Extraordinary Inter-American Conference (Buenos Aires, 1967) approved the incorporation into the Charter of the Organization of broader norms on economic, social and educational rights and resolved that an inter-American convention on human rights determine the structure, competence, and procedure of the organs in charge of that matter.

In no case may the foreigner be expelled or returned to another country, whether or not of origin, where their right to life or personal liberty is at risk of violation because of race, nationality, religion, social condition, or opinions.

ARTICLE 13. Freedom of Thought and Expression

ARTICLE 14. Right of Rectification or Response

“In addition, all freedoms are guaranteed so that no one says they can’t come to Mexico,” added López Obrador; and he also recalled the visit of the writer Mario Vargas Llosa; While he recalled that during Calderón’s administration, an artist who made certain statements against the PAN government was prohibited from entering.

Expats in Mexico and their White Savior Complex