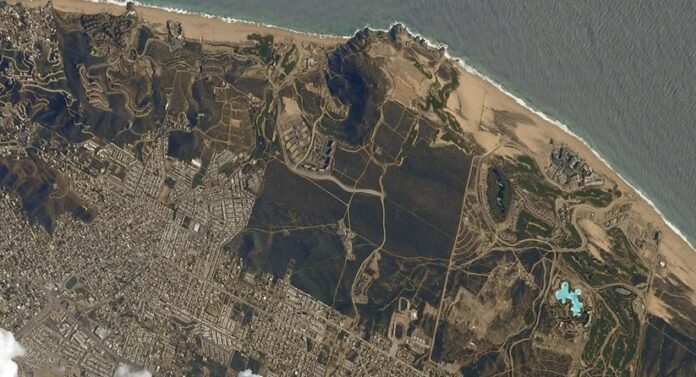 The French astronaut, Thomas Pasquet, managed to capture from space, the huge pool of the Diamante hotel in Cabo San Lucas.

Los Cabos, Baja California Sur.- The French astronaut, Thomas Pasquet, shared on social networks a unique photograph taken from the European Space Agency, where one of the largest pools in the world is observed.

The huge pool is located neither more nor less in the destination of Los Cabos .

During the taking of images from the ” alpha mission ” in space, a blue spot caught the attention of the aerospace engineer,  when he captured the territory of Baja California Sur in all its splendor .

It is the “ Crystal Lagoon ” pool at the Hotel Diamante, in Cabo San Lucas. An exclusive 4.5-hectare pond around the resort. This pool is considered one of the largest in the world, to the extent that it stands out in a large dimension from the outskirts of the planet.

The colossal artificial lagoon in service had a construction cost of 4 million dollars. It uses up to 100 times less chemicals than a traditional pool, and only 2% of the energy required by conventional filtration technologies, consuming half the water that a park of the same size occupies, and using up to 30 times less of the vital liquid that a pool requires. golf course.

The pool of the Diamante hotel , resembles a missing piece of the Cabeño puzzle, appreciated from space .

Around the lagoon, there are ample beach areas , a set of restaurant-bars , and a modern Jacuzzi for the relaxation of resort guests .

The photography of the Crystal Lagoon pool, in Los Cabos, became an international trend in applications such as Twitter and Facebook, after its exhibition

The name of Thomas Pasquet, came to light again on the web as a visionary space explorer who discovers the most hidden and imperceptible areas for the human eye in any region of the world