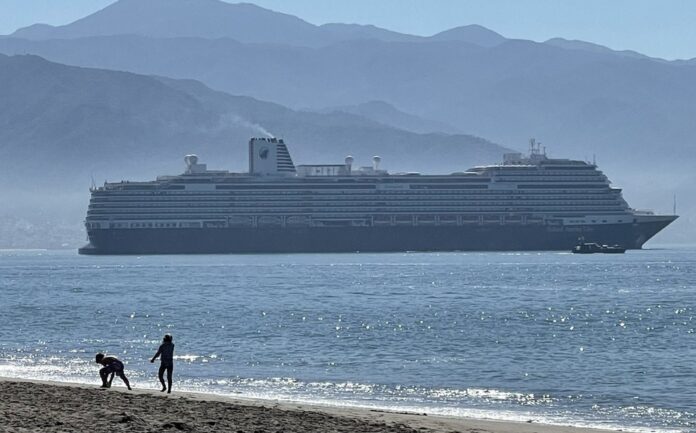 Given the confirmation of an active outbreak of COVID-19 in members of the crew of a cruise ship that arrived today at 07:30 hours in Puerto Vallarta, the health authority did not grant authorization for the disembarkation of passengers, following the Epidemiological surveillance protocol, in order to avoid risks to the health of the inhabitants of the port.

Once the positive cases were detected, close communication was maintained with the shipping company, the alternative was analyzed that all those passengers who wanted to disembark at the tourist destination could do so under restrictions and presenting a negative antigen test; However, this option was discarded because the health protocols indicate that no one could disembark when positive cases were registered in the vessel, so the decision was finally made not to disembark.

Before starting the trip, on December 18, 2021, detection tests for SARS-CoV-2 were carried out on 100 percent of the crew, detecting 1 positive case, so on December 19, the cruise set sail from San Diego (USA). ), with 874 crew members and 1,035 passengers; visited Cabo San Lucas and Mazatlán.  Upon arrival in Puerto Vallarta, the presence of active cases of COVID-19 was reported among the cruise ship’s crew.

The SSJ analyzed the epidemiological situation, determining that there is an active outbreak on the boat, given the exponential growth of confirmed cases in the crew: a total of 21 at 07:30 on this December 23. It should be noted that no case was reported in passengers at that time.

Although the SSJ did not disclose the name of the cruise ship, the Integral Port Administration (API) had scheduled the arrival of the Koningsdam cruise ship for this Thursday, which had sailed last Wednesday afternoon from the city of Mazatlán, Sinaloa, Heading for Puerto Vallarta, however, this ship was not observed in the port of the city ​​of Jalisco.

After more than a year and a half since the large cruise ships had not arrived in Puerto Vallarta due to the pandemic caused by the SARS-CoV-2 coronavirus, on August 24 of this year the first tourist ocean liner arrived in the city. Several have followed that had been arriving, some on a single occasion and others on a regular basis.

The Koningsdam is one of the large vessels that had been arriving in Puerto Vallarta without interruption every Thursday since last October 21, 2021; However, on December 23 it could not be seen moored at any of the three API docks, despite the fact that this agency had reserved one of the berths for the ship belonging to the Holland-America line.

The SSJ informs that it will continue with the actions of the International Epidemiological Surveillance.