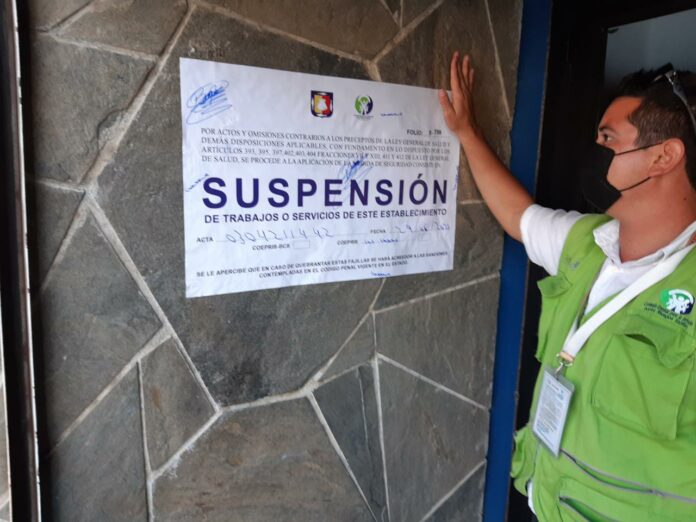 Iván Núñez Gallo, representative of the State Commission for the Protection against Sanitary Risks ( Coepris ) in Los Cabos announced that throughout the pandemic; a year 5 months, that is, 518 days, the instance has suspended around 37 businesses of different lines for violating the health protocol and of these, one in 7 relapses, achieving the temporary suspension of their services, in addition to applying a sanction economical.

I emphasize that changing to yellow at the Health Alert Traffic Light implies greater mobility and with it more responsibility in complying with the protocols, however, many businesses and residents are lowering their guard.

“Various activities were opened and the increase in the allowed capacity grew to 50%. On the weekend we had verifying personnel doing promotion and surveillance in the restaurants bars in the center of Cabo San Lucas, corroborating that they had the sanitary filters, that the capacity will be respected and ensuring that people were consuming food in addition to alcoholic beverages ”.

In relation to the popular neighborhoods, he said that unfortunately, they have received citizen complaints about bakeries, pharmacies, grocery stores and tortillerías that are relaxing sanitary measures.

He pointed out that they have detected people who do not wear the mask, do not pay attention to the sanitary filters, in addition to that they have seen businesses that do not have disinfectant mats, or antibacterial gel, nor signs that indicate the mandatory use of the mask, making it clear that This weekend, 85 businesses were reviewed and 20% of these did not comply with the biosafety requirements.

“We must redouble our efforts and adhere to the guidelines, to avoid a rise in infections and currently wherever it is it is full, we already realized that the minisuper and large self-service stores let the whole family in, something that we have to take care of a lot” .

The municipality of Los Cabos according to the numerology of covid cases until this Monday, August 30, records a hospital occupancy of 8 percent as well as a total of 31 people hospitalized, 24 in public institutions and 7 in private hospitals and in the last week from August 18 to 24 in average numbers of positive cases in the municipality a total of 24 cases.

The foregoing was reported during the meeting of the Covid Table this Monday, said Julio Castillo Gómez, executive president of the Coordinating Council of Los Cabos.

It was reported that at the most difficult moment of this third wave there were up to 230 infections a day in the municipality, currently, there are 24 and it is the ninth week that there is a drop in infections in the comparison of the last week which is A positive data and something good that is helping is the work of the institutions in coordinating efforts and the sum of the productive sector and the citizens who are reporting cases of non-compliance with sanitary measures and are keeping the protocols.

In hospital occupation, the current numbers are very similar to those that were brought in April of this year with 26 people hospitalized and in terms of active cases with 152 it is a similar number to those registered during the first 15 days of the month of April this year.

Likewise, with respect to the average number of positive cases with 24, it is very similar to what was had in the first fortnight of May.

Los Cabos continues with this downward trend because protocols are being taken care of, not stopping using the mouth cover, not attending parties or out-of-control meetings, but if this strategy is changed, there will be a regrowth as has been experienced. already, so the call of the Covid Table is not to lower your guard.