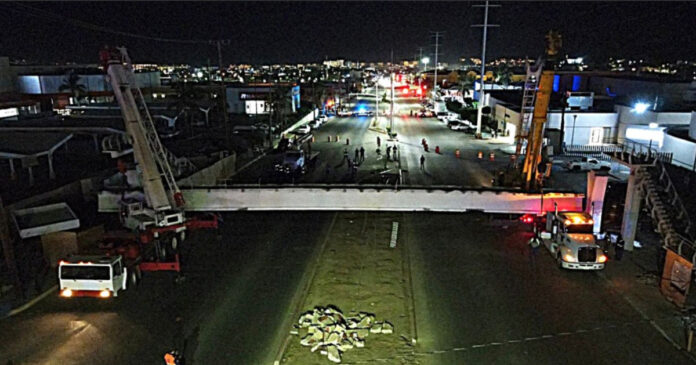 Los Cabos , Baja California Sur .- Given the risk that it represented for the physical integrity of the citizens, the first phase of the removal of the pedestrian bridge that is located on the Transpeninsular highway in Cabo San Lucas, in front of the Chedraui shopping center, was concluded, where with the support of heavy machinery the main structure known as trab was removed, which will be evaluated to determine its real condition.

In this regard, the mayor of Los Cabos, Óscar Leggs Castro explained that it will be used to remove the side stairs to build inclusive ramps.

“The structure is going to evaluate its current state. It will be the same bridge, only that it will be revised and the structure will be raised a little more, since it must be at 5 and a half meters. For now, they are going to put mesh and speed bumps, so that people do not cross and avoid causing an accident ”, mentioned the mayor.

For his part, the municipal director of Public Works and Human Settlements, Ramón Adrián Marín Cota explained that the entire upper structure of the bridge was dismantled, which allowed the total removal of the trab, which will be placed on a property of the City Council to find a way to use it again.

Finally, Adrián Marín assured that the bridge does not have any structural damage, the main problem is that it does not meet the required height.