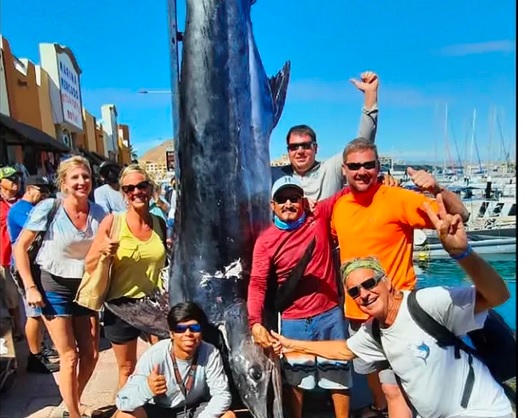 Anglers vacationing in Cabo San Lucas, Mexico, on Wednesday brought to port a blue marlin that weighed an estimated 1,000 pounds and measured an astonishing 14 feet.

Pisces Sportfishing, whose fleet was not involved in the extraordinary catch, reported via Facebook that the Minnesota anglers were aboard Dream Maker with Capt. “Cheque” Cervantes.

“Happening NOW in Cabo. Another ‘out of season’ Blue Marlin today, weighing in at 660 lbs and measured out to 169 inches; 14 feet!” Pisces exclaimed.

Marshall Ryerson, who arranged the charter, told FTW Outdoors that the marlin was so long and heavy that only part of the fish could be hoisted onto a local dock scale. Based on its 169-inch length and 69-inch girth, Ryerson added, the marlin’s weight was estimated at 1,000 pounds.

That would rank as one of the top blue marlins catches in the steeped history of Cabo San Lucas sportfishing.

(For the sake of comparison, a blue marlin caught by Pisces in 2019 weighed 814 pounds on an official scale after measuring 167.5 inches with a 66-inch girth.)

The marlin was caught by Caesar Larson and Luke Fox, who were among five anglers on a charter in search of tuna and dorado. The massive billfish attacked their lures five seconds apart and they fought the marlin with both rods for 90 minutes before it was alongside the 34-foot boat.

Ryerson, who said the marlin was in no shape to be released, addressed the greater challenge of transporting such a large marlin back to port.

“It took seven of us and every bit of energy from each of us to get the fish in the boat,” he said, referring to the anglers and crewmen. “After several attempts and help from the waves we were able to get the fish up and into the boat.”

Ryerson added that the meat was donated to a local charity that benefits impoverished children.

Tracy Ehrenberg, who runs Pisces Sportfishing, told FTW Outdoors that a 700-pound blue marlin was landed a week earlier. Both catches were unusual because the prime fishing season for blue marlin is July through October.

“However, there is always one big blue caught in the first month of the year,” Ehrenberg said. “Two is exceptional. But if you go back and examine the archives, the biggest blue marlin in my memory are caught out of season, like April or May.”

The marlin was donated to a charity that feeds impoverished children

Ehrenberg said the fleets are currently focused on striped marlin, which is more abundant during the winter, along with dorado and other small gamefish.

Catch-and-release marlin fishing is strongly encouraged in Cabo San Lucas, and the vast majority of anglers set their billfish free whenever possible.