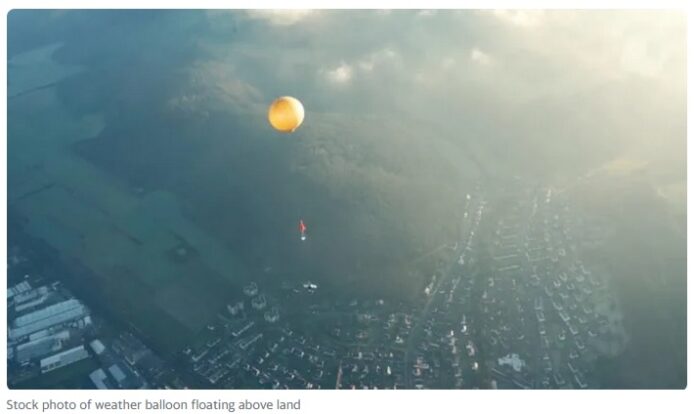 Luke Iseman released a photo of him supposedly launching a sulfur-filled weather balloon in Mexico, but the founder and his company didn’t respond to Gizmodo’s contact requests. So, here’s a stock substitute.

Mexico is cracking down on experiments in solar geoengineering. The controversial proposed climate solution, in which aerosol particles are released into the upper atmosphere to reflect the Sun’s heat, will no longer be allowed to take place in the country, the Mexican Ministry of Environment and Natural Resources (Semarnat) announced last week.

Both large-scale and in-development projects involving solar engineering are to be halted, via coordination between the Mexican environment ministry and the country’s National Council of Science and Technology, the news statement noted. The goal of the new policy is to “protect communities and environments.”

The nationwide ban comes on the heels of climate tech startup Make Sunsets’ claims that it released weather balloons filled with sulfur dioxide particles from an unspecified location in the Mexican state of Baja California Sur—without any sort of permission, dialogue, or approval from any Mexican regulatory agency or authority. The startup’s co-founder, Luke Iseman (formerly of Y Combinator and numerous other startups that seem to have floundered or been abandoned), said in a December interview with MIT Technology Review that he’d conducted two test balloon launches there in April 2022.

But Iseman has contradicted his own claims since then. In a follow-up report from The Wall Street Journal, published Thursday, Iseman changed his story to “a single weather balloon.” And in a Wednesday blog post from Make Sunsets, the company floated the possibility that it never actually released any sulfur balloons at all. “Make Sunsets will share all information about its activities in Mexico to date (if any) with… responsible agencies,” the startup wrote. “Make sunsets will cease its operations in Mexico (if there were any),” the post concludes.

It’s definitely not in Mexico’s favor to allow this sort of unregulated geoengineering experimentation on its soil. The ministry’s press statement cites a United Nations moratorium on geoengineering that Mexico and nearly 200 other countries (though not the U.S.) agreed to in 2010—as well as the risk of dangerous climactic consequences. “There are enough studies that show that there would be negative and unequal impacts associated with the release of these aerosols,” the environment ministry concluded.