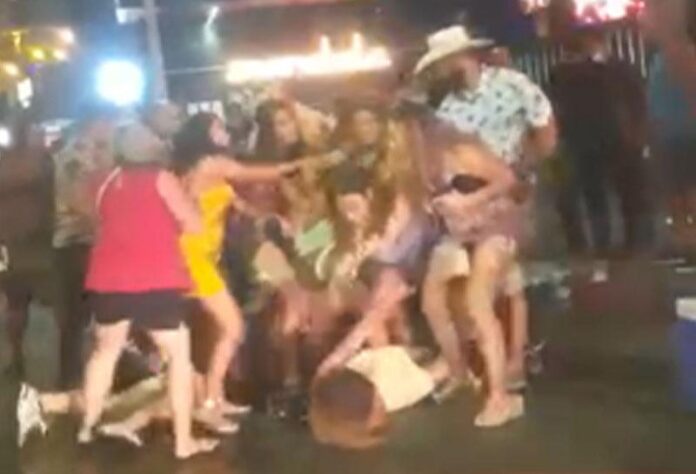 A tremendous brawl broke out last night on the outskirts of the nightclubs located on Lázaro Cárdenas and José María Morelos y Pavón streets, that is, a few meters from the traffic light and in which the protagonists of this fight were foreign tourists, events that lasted more than one minute.

One of the followers of CPS Noticias sent a video, witnessing an embarrassing situation on the outskirts of the restaurants’ and bars, in which a group of people is seen, who without keeping a healthy distance and making use of facemasks were brawling that it extended to the middle of the street.

As time went by, tourists continued with the dispute, moving from the sidewalk to the road, causing vehicular traffic to be interrupted, which gave time to the CPS Noticias follower who was waiting aboard his automotive unit to continue recording what happened.

In the images, women are seen struggling, at first glance a young woman was found on the floor being violently attacked by a woman, others tried to intervene to discourage the aggression, while another person on the ground was kicked by several.

It is observed that in the middle of the battle, the subject who was on the ground at the beginning of the video and that only his legs could be distinguished could get up, this being a male, however, due to the struggles, he fell again in the middle of the street, knocking him down To several people.

The witnesses of this video hear the voice of a male who refers, this is what is happening in the center, while his companion in English expresses, oh my goodness (my God)